Like many, I’m intrigued by this Occupy Wall Street movement.  And why not?  It purports to voice both the pain and the interests of the 99% of Americans who are harmed by the richest 1%.  Disclosure: I’m not one of the 1%.   Who are the 99%?  By definition, it includes almost all of us, so in this post I’ll be saying Us and We in addition to “the 99%,” just to honor their basic premise.  And OWS intends, it seems, to put pressure on those in positions of influence to fix the systems that have created these disparities that have damaged our society.

As this blog  is active at the confluence of philanthropy, justice, and evaluation, it would seem the OWS movement is fair game for discussion.  Though OWS has allegedly fuzzy goals and no apparent management structure as traditionally understood, does that mean it can’t be evaluated?   No.

In the spirit of advancing the state of the art of evaluating social change movements (a very undeveloped art at this point), I would put forward three criteria for evaluating the effectiveness of this particular movement at this particular point in time.  I base these solely on my own understanding of OWS as gleaned from the media and reading the signs, and not any insider knowledge. 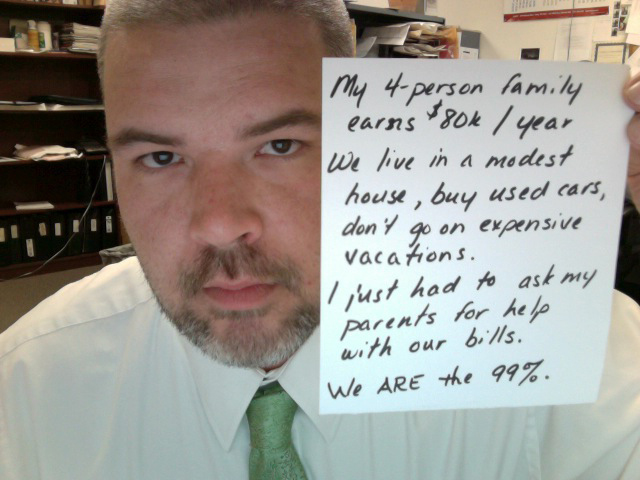 1) Growing recognition and ownership of OWS’ message.  Job One of OWS seems to be to help “the 99%” recognize the ways we’ve been abused by The System, and to be in touch with our outrage enough to demand changes in the ways The System works.  An evaluation question is, then, Is there growing recognition that the issues OWS is talking about relates to each of us, as members of the 99%?  Do I know the list of particular abuses OWS says we have experienced at the hands of the 1%?  Some, but not clearly.  And do I share in the feeling of unfairness that such abuse creates?  Yes, but I’m not sure I know how to express my outrage appropriately or productively.  So, OWS has some work to do, if my own data points are illustrative.  Carefully worded surveys and focus group discussions should provide evidence of how well OWS’ message has penetrated the hearts and minds of those it intends to speak for.

2) Growing support of the movement.   Support of the movement can be measured in many ways, not just the obvious one of crowd size (which may even be the least valid indicator of OWS success).  Evidence that could be gleaned from well-crafted surveys or polls: Numbers of people listening with an intent to understand; numbers of people identifying with intent of OWS, and cheering it on; numbers of people supporting participants with food, shelter, money, etc; numbers of people passing on the messages of OWS to others; growing access to media of various types and to people, institutions, or networks of influence.  Measuring a “groundswell of support” is an underdeveloped art, but we all know such a groundswell when we feel it.

3) Growing influence of the movement.  It may not be realistic to expect OWS, as a protest movement, to produce specific proposals or plans for fixing the systems.  Fixing the systems is more the job of people who own and keep the systems.  At this point, such people haven’t felt the desirability of moving ahead with such a change agenda.  OWS could be evaluated, then, on how well it makes its grievances known such that those with influence in policy setting circles take constructive action that closes the alleged systemic disparities at the heart of OWS’ message.  At this point, the media have provided a good deal of coverage of this movement.   Other signs of progress:  the conversation has changed, not just in the media but also at café gatherings, tailgating events, and cocktail parties.  As for influence that goes beyond talk into the realms where policy and practice can change, OWS hasn’t succeeded, to my knowledge,  much beyond head-scratching by those in charge, who ask themselves bemusedly, “What do these people want?”

In writing this blog, I find myself giving OWS passing grades so far, and recommending that greater effectiveness will come when OWS pushes out on the above three criteria.  The three sort of cascade, the first enabling the second, which enables the third.  The first is key, and so far underdeveloped, in my opinion.  Until there’s greater movement on all three fronts, OWS is little more than a consciousness-raising event.  Which isn’t all ineffectual…

Downsides to Philanthropy: The Way We Think About Charity Is Dead Wrong

There are downsides to philanthropy as well as its well-publicized upsides.  Philanthropy has a Jekyll and Hyde approach to benefiting communities and society: talking big but releasing only a trickle of cash on terrible terms […]

Social Service or Social Change: How Do We Best Save The Babies?

The Confluence of “Philanthropy, Justice, and Evaluation”

For years, my blog, “JustPhilanthropy.org” ran with the tagline: “From the confluence of philanthropy, justice, and evaluation.” Where is that place? I imagine like one of those braided Alaska rivers with crisscrossing streams – the […]